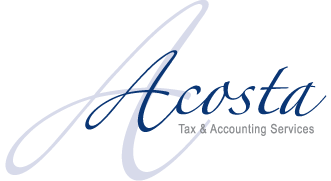 Acosta Tax & Accounting Services is a boutique firm where the emphasis is on providing our clients with the highest level of service. Finances can be an intensely personal matter and there must be a strong relationship between the advisor and the client.

Our goal is to help our clients succeed. Therefore, we endeavor to be their trusted business advisor, available to serve our clients as needed.

You may have heard the expression that pigs get fed and hogs get slaughtered. This can be especially true when it comes to income taxes and the IRS. In the Weekend January 22-23, 2011 edition of the Wall Street Journal, Laura Sauders writes an enlightening article titled “The IRS Targets Income Tricks”. In the article Laura discusses a recent U.S. district court case won by the IRS against a CPA in Des Moines, Iowa. The issue of the case was a common maneuver used by S Corporation owners, who take distributions from their company rather than salary. This saves the owner the social security and medicare tax normally due on salary. The CPA received a salary of $24,000 from his company and took $203,651 in distributions. This resulted in a tax savings on payroll taxes to the CPA of approximately $20,000. The IRS argued that the salary was too low given the CPA’s education, years of experience, and the fact that entry level accounting graduates typically make $40,000. The IRS won the case and the CPA is expected to appeal. However, S Corporation owners should take note of this case. The IRS has put S Corporation owners on notice that it intends to aggressively review owner salaries to make sure they are reasonable. Personal service firms such as accounting, law, physicians, engineers, and consultants should particularly be mindful of this case. It is important that the salary be reasonable based on the income generated by the company and industry standards.